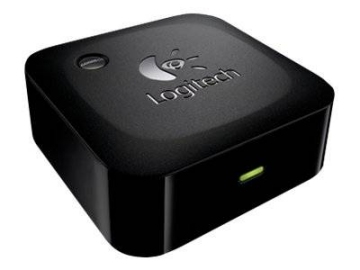 Verdict: Perfect for Boomers. You’ll will never get more for $40.00 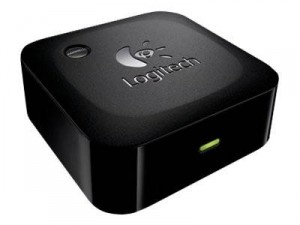 The Logitech® Wireless Speaker Adapter for Bluetooth® audio devices is one of the most useful devices I have purchased in years. What it does is allow you to wirelessly connect your existing stereo system to any device that has Bluetooth built into it. And these days just about every mobile device has Bluetooth – even my $40 cell phone has Bluetooth.

If you are unfamiliar with Bluetooth, it was developed as a way to connect your phone to those wireless earpieces you see some people wear. The earpiece syncs with their phone which they carry in their purse or pocket. A couple years went by and as states either outlawed using your cellphone while driving, or at least began talking about it, so Bluetooth adapters started being added to car radios.  The Bluetooth adapter allows drivers to talk and drive without holding a phone to their ear. In my opinion, and many others, this doesn’t necessarily make driving any safer but it does make cellphone usage much harder to detect.

A few more years passed and as the quality of the Bluetooth signal improved some smart people realized that Bluetooth could be used to stream music to other Bluetooth enabled devices. Companies like Bose and Sony picked up on this quickly and developed products like the Bose SoundLink ($269 on Amazon) and the Sony Speaker Dock ($248 on Amazon) with Bluetooth. While good products, they left me and a lot of others out in the cold because of the cost – which is especially galling if you already have an existing, expensive stereo system. Thankfully, Logitech came to the rescue.

Logitech has been using Bluetooth to pair wireless keyboards and mice with computers and tablets for years. They took this expertise and created the Wireless Speaker Adapter. It is a tiny device about 3” wide by 3” deep and an inch high. It has plugins for the standard stereo connectors (known as RCA plugs) as well as an input for the standard 1/8” plug used by most computer speakers. All you need to do is connect to your stereo receiver using the auxiliary input or connect your computer speakers to it. Plug-in the power supply for the Wireless adapter and then press the “Connect” button of the top of the unit. Next, on your phone, iPad, iTouch, tablet or what ever device the music will be streaming from, got to Settings, select Bluetooth.  You will see a message that the device is looking for a Bluetooth device to connect to. After a few seconds the Logitech Wireless Adapter will be listed. Select it, click OK and you are done. Turn on your stereo, pick your song and let ‘er rip. The sound quality is very good, not as good as a CD, but still very good – least  good enough that I couldn’t tell the difference.

In fact, the only bad thing I have to say about the Logitech Wireless adapter is the packaging. It came in one of those plastic store display cases that hang from a wire rack. I would show a picture but I destroyed it in the process of extracting the adapter. One other minor issue, I bought mine from Amazon and the demand is such that I had to wait several weeks for it to be delivered, still it was well worth the wait.

Overall the Logitech Wireless adapter is just about the best $40 I’ve ever spent. If you want to stream music an MPG player to your existing stereo system you can’t do any better.  Buy one, you won’t regret it.