Amazon Echo – Another Hit for Amazon? 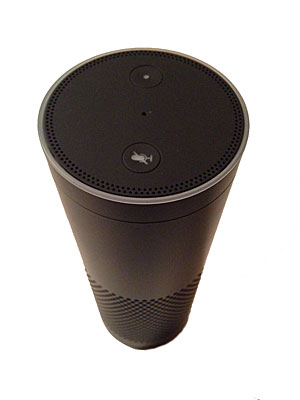 Overview:  The Echo sold by Amazon is a voice activated speaker system.  It includes a service similar to Siri that can answer questions and create lists.

Strengths:  Very good quality sound from a small speaker.  Can be controlled by voice or app.  Links to your WiFi or can be used for Bluetooth streaming audio.  Voice recognition is very good.

Weaknesses:  Cost.  At $200 it may be a little over-priced.  Also, the Echo has no battery, it must be plugged in to operate.  No Pandora, no Spotify.

Details:  The Echo is the latest gadget from Amazon where C.E.O Jeff Bezos appears to be taking over where Steve Jobs at Apple left off.  He seems to have a knack (like Steve Jobs) of knowing what you need before you know you need it.  He hit it big with the Kindle readers, but is the world ready for Echo?

To start with, what is Echo?  The easiest way to describe it is to say that it is a streaming music system with a Siri like persona tacked on. While that may be the easiest way to describe it isn’t necessarily the most accurate.  Echo does both more and less than Siri and more and less than a streaming speaker.  Note: If this first paragraph doesn’t make much sense, and it probably doesn’t, it because describing Echo is like the Doctor trying to describe Time “… it’s more like a big ball of wibbly-wobbly, timey-wimey stuff.”

First and foremost Echo is voice-controlled streaming music system.  You link it to your WiFi network and, at your command, it will play music from Amazon Music (which includes the Amazon Prime Music Library if you are an Amazon Prime member), iHeartRadio, Tunein, or your own music library.  What is noticeably missing is Pandora and Spotify.

Of course, what really separates Echo from any other streaming music system, such as Sonos or Bose SoundTouch, is voice control.  Simple commands allow you to select your favorite station, playlist or music genre.  Each command must be preceded by the trigger word “Alexa” (or “Amazon” – no other choices). You can raise or lower the volume, pause and resume music or stop it entirely using commands such as “Alexa, raise the volume”, “Alexa, pause the music”, “Alexa, play my exercise playlist”, “Alexa, repeat”, or “Alexa, stop”.  The commands are very simple and in most cases there are several variations so you don’t need to memorize them.  More often than not you can take a guess at what the command should be and you’ll probably get the response you want.  For example, I’ve found  at least three ways to turn up the volume:  “Alexa, turn it up”,  “Alexa, raise the volume”, “Alexa, volume 5 (on a scale of 1-10)”.  There are probably more but those work for me.

If all the voice activation did was control the music plays that would be enough.  However, Echo can do much more.  Like Siri it can find the answer to almost any reasonable question.  The question I ask first thing every morning is “Alexa, what’s the forecast for today” because I can never seem to remember the forecast from last night.  You can ask questions such as “How high is Mt Everest?”  (29,029 ft / 8,848 meters. apparently) or “What was Elton John’s first album?” (Empty Sky).  More useful questions are things like “how many cups in a pint” (2 cups – I can never remember if it is 2 or 4).  A couple of other useful things Alexa can do is add tasks to a To-Do List or items to a Shopping List.

One of the keys to using Echo is the Echo App.  The app works with Apple, Kindle Fire (of course) and Android mobile devices.  What it does is keep track of all your requests / questions plus store your To Do List and Shopping list.  It also provides feedback to Amazon regarding how you are using Echo (they claim Echo gets “smarter” as you use it).  The app also gives you a method for improving Echo’s voice recognition software (which  is already very good) by asking if it understood each command / question. 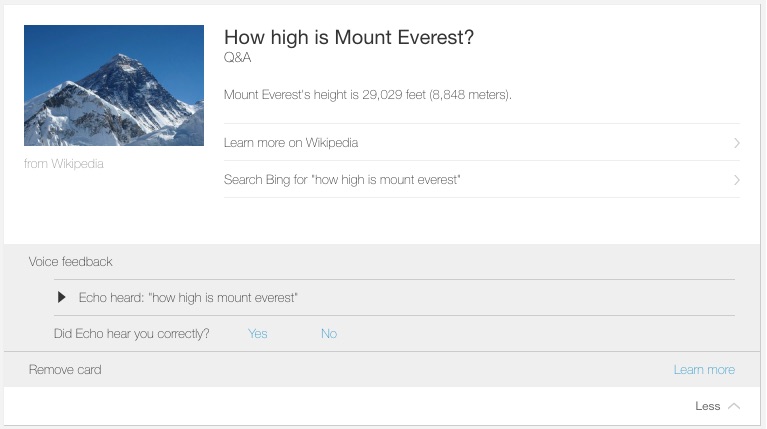 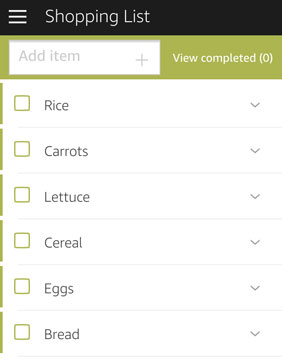 Once you get past all the unique things that Echo can do, its time to judge it as a music system.  Overall the Echo does a good job.  In terms of sound quality and volume it is equal in quality to most Bluetooth speakers in the $100 – $150 dollar range.  It has decent bass and is capable of surprising high volume without distortion.  The mid-range is good, but the high-end suffers.

The voice control works surprisingly well (it has a series of microphones arranged in a circle at the top of the unit so it can pick-up sound from any direction.   If you get tried of saying “Alexa, turn it up” or “Alexa, skip to the next song” you can use the included remote or the Echo app.  Both work well and the app has the advantage of being usable from anywhere.  You don’t even have to be in your house to start the music, I’ve already started it from work (accidentally).

Summary: The Echo is a well thought out product that, if you are in the market for a streaming music system such as Sonos or Bose SoundLink, or if you are looking for just a Bluetooth speaker the Echo is worth a look.  At $200.00 is a little expensive but appears to be well made and has the added advantage of Alexa to help you through your day. One of the things Echo can’t do is contact 911, however knowing Amazon, that is only a matter of time.

Note, if you have a recent iPhone, iPad or iPod Touch you can add some of the same functionality of Echo by activating its “Hey, Siri” function.  Once activated all you need to do is say “Hey, Siri” while the device is plugged in.  If your device is attached to a Bose SoundDock or a Bluetooth speaker you can duplicate some of the Echo functions such as playing music (except for increasing or decreasing the volume), hearing the day’s forecast or creating a To Do List, but it doesn’t work nearly as well as Echo – their microphones just aren’t sensitive enough.