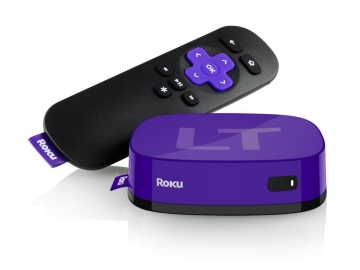 Verdict:  a Boomer Best Buy.  Once you have one you will wonder how you lived without it. 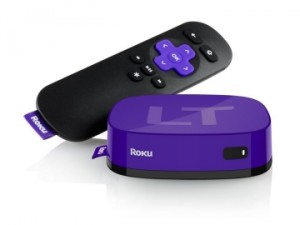 There was a period of time, when the economy was running on all cylinders, when my wife and I thought nothing of spending $160 a month for cable TV and high-speed internet.  Two things happened that made us decide we could live without cable TV.  One, the local stations all switched to HD broadcasting so we could watch TV with a set of rabbit ears stashed in the basement (we’ve connected into the whole house cable system so our TVs don’t have the rabbit ears setting on top of them the way they did when I was a kid).  Two, and more important, the Roku streaming player was invented.

What is Roku?  Roku is a very small unit, about the size of a hockey puck, that allows you to watch internet-based video “channels” on your TV.   Internet channels (also referred to as streaming video services) such as Netflix, Crackle, Major League Baseball provide much of the same programming that is available on cable, but without a cable provider such as Cox, Mediacom or Time Warner.

For Roku to work you must connect it to your high-speed internet service (a DSL connection with a download speed of 1.5mbps is enough).  Connecting the Roku to the internet couldn’t be easier.  Go to settings in the Roku, select your local WiFi network and enter your password.  Once the Roku is setup you can use it to access Netflix, HuluPlus, Amazon Prime, Crackle or any of the other streaming video services.  The Roku player goes a long way towards replacing your cable channels at a much lower price.

It is important to note before you buy a Roku player (they start at $50) you must have the following:

2)      A TV with an HDMI input or a standard video input with inputs for right and left audio channels.

3)      A Wifi network.  If you don’t have a Wifi network it is not expensive or hard to set one up.   I purchased a Linksys Wireless-G Broadband Router for $50 from Amazon and had it setup within an hour.

Some of the video channels that Roku links to our free (like Cracke or Pandora) but others, such as Netflix charge a monthly fee.

If you meet the requirements and want to save even more money, buy the purple Roku player for $49.95.  You can buy more expensive Roku boxes but for most people the purple one will work fine.

Once you’ve received your Roku the first step, before plugging it in, is to connect it to your TV.  You have two choices, either use an HDMI cable (not included – you can buy one from Amazon or Radio Shack usually for less than $20) or you can use the included RCA cable and follow the color coding.  The yellow plug goes to the Video input of your TV, the red plug to the Left channel audio input and the white plug into the Right channel audio input.

Now plug in the Roku.  Turn on your TV and use your TV’s remote control (use the input / source button) to select the Roku screen.  The Roku box will guide you step by step through setup.  You’ll need to enter a credit card number as well as your address.  Roku makes some recommendations regarding streaming video and audio sources.  Select the channels you want to view – I recommend starting with Netflix, Crackle and Pandora  – and you are on your way.

Even though Netflix is a subscription service (currently at least $9.95 per month) it is well worth it.  Pandora is an online radio service and is free as is Crackle.  Even with the cost of our internet connection, Netflix and HuluPlus, my wife and I are saving close to $100 per month.

All in all, the Roku box is well worth it.  It does have a few rivals, one of them is Apple TV.  If you generally use iTunes to purchase music and video, then the Apple TV box is a good choice even though it costs twice as much.  The nice thing about Apple TV is it integrates perfectly with your iTunes collections (which the Roku cannot do).