The new Surface 2 Tablets – A Step Forward For Microsoft 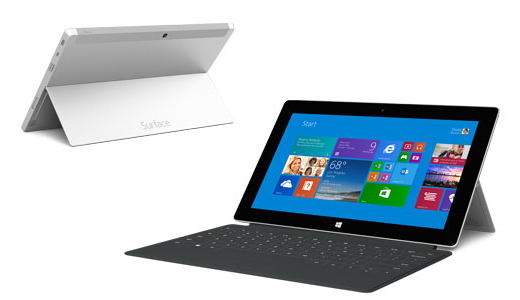 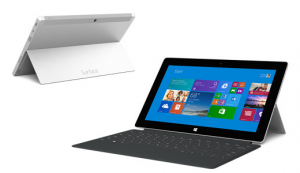 On Monday, September 2nd, Microsoft announced that the Surface family of tablets is growing. Two new Surface models — Surface 2 and Surface Pro 2 — in addition to some new Surface accessories, will be available at Microsoft retail stores, http://www.MicrosoftStore.com and select third-party retailers and commercial resellers in 22 initial markets on Oct. 22  (China in early November).

Microsoft claims the Surface 2 and Surface Pro 2 will each benefit from significant updates, including improvements in processing power and battery life.  The display should also improve as well as the camera resolution.  Also, the Kickstand now has two settings, so it’s more comfortable to use the Surface at a desk. Microsoft  says the two settings will make the Surface more comfortable to use in your lap, but personally I can’t see how that could be.  I’ve tried using the Surface with the Kickstand extended in my lap, the reason it doesn’t work has a lot more to do with discomfort than the lack of a second viewing angle.

Surface 2
September 23, 2013
Surface 2 now features a silver magnesium body and is available in 32GB and 64GB configurations. Starting at US$499, Surface is powered by an NVIDIA Tegra 4 processor, making apps run faster and smoother and increasing battery life to up to 10 hours.
Image: Web | Print

Surface Pro 2
September 23, 2013
Starting at US$899 and weighing in at just two pounds, Surface Pro 2 is available in 64GB, 128GB, 256GB and 512GB (where available) versions, with either 4 GB or 8 GB of RAM. A 4th-generation Intel Core i5 processor provides incredibly fast performance and up to 75 percent longer battery life, so you can do more on a single charge.
Image: Web | Print

New, two-way kickstand design
September 23, 2013
Both Surface 2 models feature a sturdy new kickstand design with two positions, making Surface 2 and Surface Pro 2 more comfortable to use on your lap or at a desk.
Image: Web | Print

Type Cover 2
September 23, 2013
With Type Cover 2, the next-generation click-in keyboard for Surface, classic is now colorful with options of magenta, cyan, purple and black. The keyboard is backlit so you can work and play in any lighting condition with the same super-thin, lightweight design of the original Type Cover.
Image: Web | Print

Touch Cover 2
September 23, 2013
The cover you can type on just got better. With backlit keys, you can work and play in even more places — day or night.
Image: Web | Print

Arc Touch Mouse Surface Edition
September 23, 2013
Inspired by Surface, this special edition Arc Touch Mouse is perfect for life on the go. It’s comfortable, elegant and eye-catching, with a sleek design that allows for quick use and storage. Simply curve it to power on and flatten it to power off, and slip it into your pocket or bag as easily as a cell phone.
Image: Web | Print

Car Charger
September 23, 2013
Stuck in traffic between meetings? Power up and drive at the same time. Using Car Charger, charge up your Surface and another USB device while you’re on the go.
Image: Web | Print

To help people get the most out of Surface 2 and Surface Pro 2, customers purchasing either device will receive free Skype calling to landlines in more than 60 countries for one year, unlimitedSkype WiFi on their Surface 2 or Surface Pro 2 at more than 2 million hot spots worldwide for one year, and 200 GB of free SkyDrive storage for two years.

Surface 2 is a good table for personal use.  It’s thinner, lighter and cheaper than the Surface Pro.  If what you need is a table you can use as an e-Reader, email checker, web browser and occasional movie viewer the Surface 2 is a good choice.   It is powered by an NVIDIA Tegra 4 processor, making most apps run faster and smoother and increasing battery life to up to 10 hours for video playback. The 10.6-inch ClearType Full HD display now renders 1080p video for TV shows and movies, and its full-size USB port has been upgraded to USB 3.0 for up to four times faster file transfers. Camera resolution has also increased, with a 3.5-megapixel front camera and 5-megapixel rear camera, both capable of capturing 1080p video and featuring improved low-light performance, making face-to-face conversations crisp and clear.

Surface Pro 2 is the successor to Surface Pro and, like its predecessor, is a true laptop replacement, capable of running virtually all your Windows software including the full Microsoft Office suite,[2] as well as apps from the Windows Store. Surface Pro 2 offers the portability and simplicity of a tablet when you want it and the power and flexibility of a laptop when you need it. It is powered by a fourth-generation Intel Core i5 processor which, combined with other improvements, delivers increased performance and up to 75 percent longer battery life than Surface Pro.

Full specs are available at http://www.Surface.com/pre-order.

If you’re interested in the new Surface 2 or Surface Pro 2, either can be pre-ordered starting at 8 a.m. EDT on Sept. 24, 2013, at http://www.MicrosoftStore.com, Microsoft Stores, and Best Buy in the U.S. and Canada, as well as select retailers in most Surface 2 and Surface Pro 2 launch markets.

Type Cover 2 features the same super-thin, lightweight design of the original Type Cover, but it’s now backlit and will be available in Cyan, Magenta, Purple and Black in the coming months. It’s also more rigid, providing a better lap-typing experience, and is designed to be noticeably quieter when striking keys. Type Cover 2 will have an estimated retail price of $129.99. It will be available for pre-order on Sept. 24 in all markets where Surface devices are available for pre-order.[3]

The Wireless Adapter for Typing Covers connects magnetically to any Touch or Type Cover, letting you type from anywhere in the room using Bluetooth technology, so it is even easier to connect Surface to a TV or monitor[4] and type from another location, such as the couch. Wireless Adapter for Typing Covers will have an estimated retail price of $59.99. It will be available for pre-order in the U.S. and Canada beginning Sept. 24.

Car Charger plugs into most cars’ power or lighter ports and charges Surface without the need for an additional adapter. It also features a USB port to allow simultaneous charging of a phone or other device. Car Charger will have an estimated retail price of $49.99 and has a projected release date of early 2014.